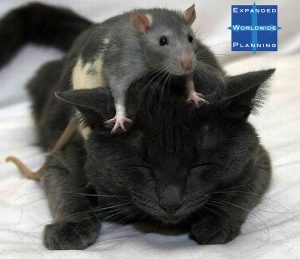 The universality of Expanded Worldwide Planning (EWP) is not to be denied. This is objectified by Wikipedia. In the first sentence of their page on International Tax Planning, Expanded Worldwide Planning (EWP) is featured.
We are taking a cue from Wikipedia. Over the next few weeks, we will feature one of the six principles of Expanded Worldwide Planning (EWP). The six principles are: privacy, asset protection, tax shield, succession planning, compliance simplifier, and trust substitute.
Today we feature PRIVACY. Privacy is a key element. With FATCA, CRS, and Registers of Beneficial Ownership our clients are looking for ways to keep their affairs private, and still be compliant with tax authorities worldwide. But as you know, it is a cat and mouse game that takes study and constant attention to detail. As you can see from our image, we don’t quite know who is winning.

“Behold, I set before you this day a blessing and a curse….” (Deuteronomy 11:26, King James Bible.) This is an apt phrase to describe the context of privacy today, where with a touch of a keystroke you can send megabytes of data around the world in an instant.
What was once private and personal becomes public and accessible to all. Computers and other electronic devices are part of our lives, whatever our opinion of them. These devices can add convenience and efficiency to our lives, but at a cost.

Electronic Privacy?
This thought is expressed by Andrew Grove, co-founder and former CEO of Intel Corporation. Mr. Grove’s thoughts on internet privacy appear on the Privacy page of Wikipedia:

“Privacy is one of the biggest problems in this new electronic age. At the heart of the Internet culture is a force that wants to find out everything about you. And once it has found out everything about you and two hundred million others, that’s a very valuable asset, and people will be tempted to trade and do commerce with that asset. This wasn’t the information that people were thinking of when they called this the information age.”

Expanded Worldwide Planning (EWP) has the six principles that matter most to wealthy families throughout the world today–no matter where they are located. They are the building blocks of any successful asset structure.

The ancient Greeks called man, “a political animal.” In today’s world almost all so-called facts are politicized. It is no different with privacy. Certain groups call the journalistic authors of the Panama Papers and the Paradise Papers heros of a free press. Others say that these same journalists were thieves, who unlawfully stold private financial data. Whatever your opinion, these events did happen, and the targets were most decidedly wealthy families throughout the world.

How does the privacy afforded by a properly structured PPLI policy protect the families whose financial information was published for the entire world to see?
The privacy principle of Expanded Worldwide Planning (EWP) accomplishes its objective in several key ways:

“The privacy paradox is a phenomenon in which online users state that they are concerned about their privacy but behave as if they were not. While this term was coined as early as 1998, it wasn’t used in its current popular sense until the year 2000.”

The authors go onto to explain this in more detail:

“Some researchers believe that decision making takes place on an irrational level, especially when it comes to mobile computing. Mobile applications are built up in a way that decision making is fast. Restricting one’s profile on social networks is the easiest way to protect against privacy threats and security intrusions. However, such protection measures are not easily accessible while downloading and installing apps.”

There is also another type of Privacy Paradox pertinent to Expanded Worldwide Planning (EWP) in the reporting of data breaches and news reporting on wealthy families. This is aptly put by Filippo Noseda of the Mischon de Reya law firm in London:

“It is somewhat curious that serious newspapers who have been covering both the private banking scandals and the erosion of privacy seem unable to make the connection between data protection on the one hand, and the Common Reporting Standard (CRS) and beneficial ownership registers on the other.”

“As if they were living on planet Europa rather than in Europe, the European Parliament, the Organization for Economic Co-Operation and Development (OECD), and politicians show complete disregard for the warnings raised by their own data protection bodies and instead appear hell-bent on introducing a system of total transparency.”

We have grown accustomed to the idea that transparency is a good thing, something that supports the common good. Like many concepts, if taken to an extreme, it becomes its opposite. A weapon in the hands of governments hungry for wealthy citizens’ tax dollars. As proponents of Expanded Worldwide Planning (EWP), we must question this overzealous approach to tax collection.

The History of Privacy
Let us end with some general historical information on privacy, and how Expanded Worldwide Planning (EWP) and PPLI can further the aims of wealthy families seeking increased privacy, asset protection, and tax efficiency.
We quote two eye-opening passages by Greg Ferenstein’s “The Birth and Death of Privacy: 3,000 Years of History…,” courtesy of Medium:

“Privacy, as it is conventionally understood, is only 150 years old. Most humans living throughout history had little concept of privacy in their tiny communities. Sex, breastfeeding, and bathings were shamelessly performed in front of friends and families.”
“Privacy-conscious citizens did find more traction with what would become perhaps America’s first privacy law, the 1710 Post Office Act, which banned sorting through the mail by postal employees.”

This last quote seems quaint in light of the large-scale, present-day concerns of unauthorized data sharing by social media sites.

Expanded Worldwide Planning (EWP) and PPLI are employed by our firm Advanced Financial Solutions, Inc. to not only give you enhanced privacy, we also keep you compliant with tax authorities worldwide. Our firm can be confident of our success, because PPLI and Expanded Worldwide Planning (EWP) asset structuring greatly simplifies the process, and in addition, gives you the privacy that you seek.
We invite you to take advantage of our services, and would enjoy hearing your comments and questions about the topic of privacy. Please contact us today for a no-obligation, introductory consultation.